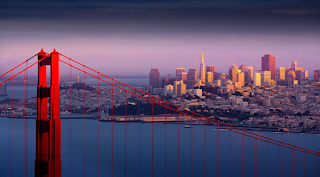 Discover San Francisco and you will see it is phenomenal. Like Alice in her Wonderland, you will find there is even more to see in San Francisco than you have dreamed about.
The term “Melting Pot” is used to describe many American cities and towns. This is indeed true for San Francisco – the cultural, commercial, and financial center of Northern California. San Francisco is located at the tip of the Peninsula, with the Pacific Ocean on the west, San Francisco Bay on the east and The Golden Gate to the north. The neighborhoods are varied, yet each features cohesiveness as unique as its inhabitants. Nearly half of those who live in the Bay Area were born outside of the United States or have at least one nonnative parent. San Francisco is the city of four seasons—every day. Rows of elegant houses, the famous cable cars, clusters of ethnic neighborhoods, and the colorful waterfront all add to the distinctive international flavor of the city.
San Francisco’s reputation as a rollicking city where almost anything goes dates back to the boom-or-bust days of the California gold rush. As one of America’s most free spirited cities, you can find everything here from 1960’s hippy culture to trendy people. There is always something different to do, whether it’s hanging out in one of the parks or listening to your favorite band at a night club. The hilly streets provide some gorgeous glimpses of the sparkling bay and its famous bridge.
The city’s well-known hills offer stunning views of the Pacific Ocean and San Francisco Bay, and feature a wide array of shops, restaurants, and cosmopolitan nightlife. In addition to its diversity and charm, San Francisco is a major financial and insurance center, an international port, and the gateway to Silicon Valley, America’s premier high-technology center. The consistently spring-like weather and unique atmosphere attract corporations as well as visitors, and the solid economic base keeps them there. Bicycling is considered to be a popular mode of transportation in San Francisco with more than 40,000 residents commuting to work regularly by bicycle.
One of the best things about San Francisco is that you can be in a museum in the morning and on a mountain in the afternoon. Mind-expanding cultural attractions exist alongside invigorating outdoor activities. Gaze at the work of Jackson Pollock at the San Francisco Museum of Modern Art in the morning and then head to the Muir Woods to peer up at gigantic redwoods in the afternoon. One can always find something new to see and do not matter if it’s a 1st or 50th visit. From the hippie haunts of Haight-Ashbury to the colorful Victorian architecture of the predominantly gay Castro District, and from Japantown to Chinatown, San Francisco is all about neighborhoods. You could easily spend a day in each, or hop on a streetcar to sample a few.

Consistently ranked as America’s Favorite City, San Francisco never ceases to entertain. Enjoy the cool blast of salty air as you stroll across the Golden Gate. Stuff yourself with dim sum in Chinatown. Browse the Secondhand shops along Haight Street. Recite poetry in a North Beach coffeehouse. Stroll Ocean Beach, skate through Golden Gate Park, ride the Cable Cars to Fisherman’s Wharf, tour a Victorian mansion, explore Alcatraz Island, go to a Giants ball game — the list is endless. If you love traveling or love to spend a wonderful time with your family, then you should be heading to San Francisco.